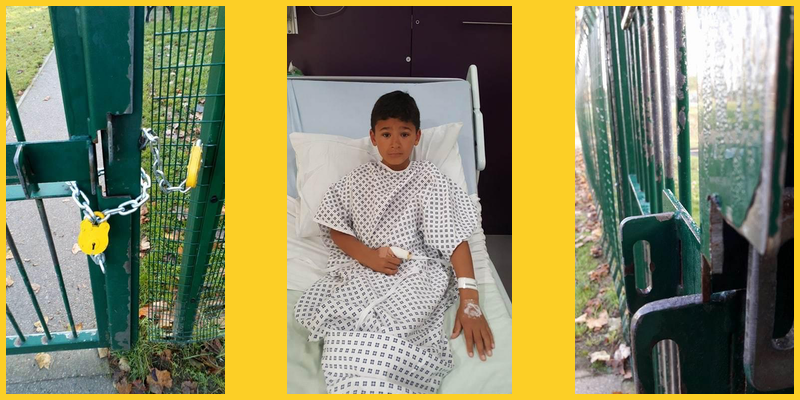 A little boy had to have part of his finger amputated and sewn back together after a park gate acted like a ‘guillotine’, his mother has said.

Frankie Delius, 7, was heading into Stevens Park in Welling with his sister and granddad to play after school last Wednesday (November 1).

However, Frankie’s finger was sliced open as his sister opened the gate to the park.

The ‘razor sharp’ gate sliced Frankie’s finger down one side and he was rushed to Queen Elizabeth’s hospital in Woolwich to have it partially amputated.

Frankie’s finger was then sewn back together on Friday, but his mum Michele said he will have to miss out on things because of the sharp gate.

She said: “It was all very distressing for him last week, especially before the surgery. He has gone back to school today but he was a bit upset he wouldn’t be able to join in at play time. He’s very active boy so this has affected him.

“He was a bit frightened last week going in for surgery, and that was awful because there was nothing I could do to help.

“They need to do something about the gate because this could have been anyone’s child, even an adult, it was basically like a guillotine on his finger.”

On Friday, November 3, surgeons at St Thomas’ reattached part Frankie’s finger and he should eventually be able to write again.

His mum said Frankie was brave to go through with the surgery, but hopes the gate will be fixed before another accident happens.

She said: “Frankie will have to help opening his packed lunch and will miss out on play time so he was upset about that, but he will be ok.

“I just want to make sure the gate gets fixed. It’s a really busy park.

“Frankie was lucky he didn’t lose more of his finger.

“People on Facebook were very supportive which was very nice. It’s encouraging to see people care.”

In pictures posted online a council noticed had been attached to gate and it had been chained up.

A spokesman for the parks department at Bexley Council said it is investigating what happened.

He said: “We are aware of this distressing and serious accident. We are in touch with the family and hope that this young boy makes a speedy recovery.

“The gate was immobilised and removed for repairs the day after the accident. The gate has now been reinstalled but remains cordoned off from public use. A detailed investigation in now underway.”

‘this distressing accident once again proves the importance of undertaking regular risk assessments on a manual gate. At this stage, it is unclear exactly how the accident occurred but there are a number of ways in which the safety of this type of gate can be improved, including the fitting of finger guards, soft stop mechanisms and stop plates. Gate Safe continues to raise awareness of the correct safety protocol for ALL gates and the charity sends it best wishes for a speedy recovery to the child concerned’