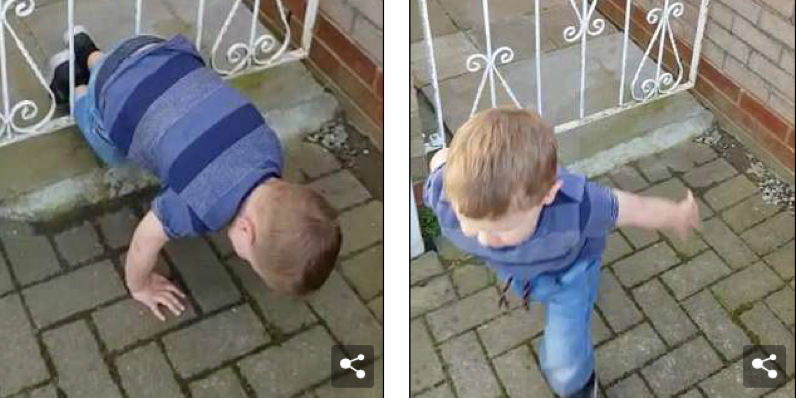 The gate escape! Escape artist toddler terrifies parents by wriggling through iron garden gate and bolting out onto the road

This is the incredible moment a toddler carried out the GATE escape by wriggling through the iron bars of the garden barrier after his dad turned his back for two minutes.

Escape artist Austin Gilbert terrified his parents by squeezing through a tiny gap in their garden gate and running free around their cul-de-sac – all while his dad popped to the bathroom.

The three-year-old had been playing under his dad Sam’s watchful eye when he nipped into the house, believing his son was safe. But in that time Austin ran to the gate and slipped through on his hands and knees. After frantically searching the house for the crafty toddler, she was horrified to discover him outside on the other side of their locked gate.

Hannah from Whitchurch, Bristol, said: ‘When you’re a mum you develop what I like to call a ‘mummy sense’ where you know something just isn’t quite right.

‘I was getting ready because we were heading off to a party and it was the sound of the gate that awakened what I call my ‘mummy sense’.

‘I heard the gate rattling slightly and thought ”that’s not normal”.

‘I shouted down to my husband who was supposed to be watching him and there was no reply.

‘I ran around the side of the house and he was there on the other side of the locked gate. I ran inside to check the front door and that was locked.

‘We knew he was quite the escape artist and advanced for his age, he was walking at six months old and riding a balance bike at nine months.

Little Austin Gilbert seized his moment and dashed to the gate as soon as his dad nipped inside to the bathroom. He first stuck his head through the gate and then squeezed his torso through

‘But how far can you prepare as a parent for that? One thing I’ve learnt is that if a dog could fit through it, Austin can fit through it.’

Once he was back inside their garden, horrified Hannah asked her son to show her how he’d got out and couldn’t believe her eyes as Austin wriggled his way through the gap in the gate.

In a hilarious video the excited toddler gets through the bars and then takes off down the street.

Hannah said: ‘I had no idea he was breaking through the gate when I heard it knocking.

‘When it rattled again I went downstairs because you don’t ignore quiet and strange noises when you’re a mum. I looked out into the back garden and there was no one there. I was shouting to both Sam and Austin at this point.’

Once he had slipped his torso through the gate at an angle he then pulled his legs through. The little boy then jumped to his feet and bolted out onto the road

‘Usually they’ll both hide and scare me so I thought they were doing that and I tried to coax them out but they didn’t come out of their hiding place.

‘My husband had gone to the toilet which is at the back of the house so he hadn’t heard me shouting.

‘By this point I screamed after Austin and I just heard a little voice say, ‘I’m here, mummy’.

‘He was running around the cul-de-sac and knocking on our neighbours’ doors.

‘I just took a deep breath, looked at my husband and gave him a tap on the shoulder.

‘Every instinct in me wanted to shout at him but I just said, ‘that’s really smart Austin, can you show mummy and daddy how you did it?’

‘Then he wiggled back through the gate and we were looking at each other in disbelief thinking ‘how on earth did he fit through there?’

Thinking she was already a step ahead of her lively boy with a secure iron gate, Hannah claims she could never have prepared for him to fit through the gap and the couple were forced to go and buy a new gate without any gaps.

But it’s not the first time Austin has successfully made a bid for freedom, having successfully swiped his mum’s keys, opened the front door and clambered into her car in a matter of minutes.

Hannah said: ‘We are really lucky we don’t live on a main road. Happily, we know all our neighbours and they have been keeping an eye on him.

‘I felt so awful as a parent when he managed to get out. I thought ‘I’m going to have to record this because no one will ever believe me’.

‘After that all our plans were cancelled and we went off to buy a new fence – a nice solid wooden one with no gaps.

‘He is always figuring out things and climbing up stuff. I had to report that to the child minder when we first took him, he’s let about three other children out of childcare before.

‘When I went to the toilet one day he managed to get the pole for the loft.

‘On another occasion he got my car keys and by the time I found him he’d opened the front door and was climbing into my car.’

Video shows the little boy contort his body like a professional escape artist as he squeezes through the very small gap between the iron bars of the garden gate.

Once through, he jumps to his feet and bolts straight out onto the road outside.

Richard Jackson of Gate Safe commented: ‘Some very clear evidence to support the need for a maximum 100 mm gap between the vertical pales of a gate – although there shouldn’t be more than 100 mm gaps in any areas of the gate’s design e.g. underneath the gate and around the hinges’