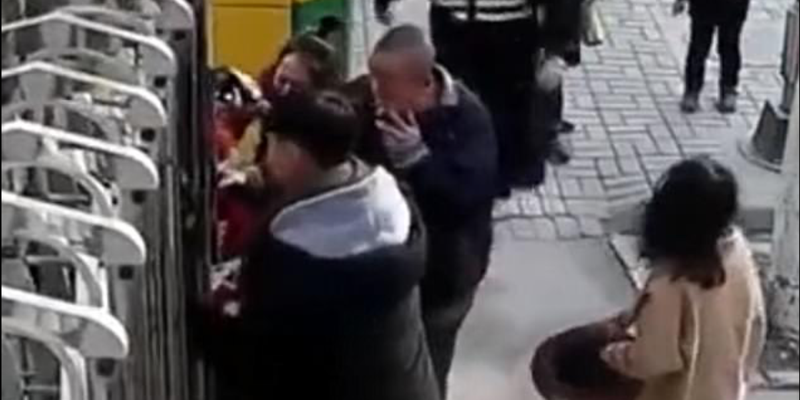 Shocking moment toddler boy gets firmly stuck in an expandable metal gate after it suddenly started retracting when he put his head into it.

A toddler boy in China has been rescued after having his head trapped in a security gate when the automatic barrier suddenly retracted. His mother can be seen desperately trying to pull his son out before onlookers rushed over to help.

The three-year-old was freed after a swift rescue and was taken to a hospital for checkup. He did not sustain any injuries.

According to Jiangxi Network Television, the incident happened outside a kindergarten in Yinchuan in Ningxia Hui Autonomous Region on March 19. The unnamed boy can be seen climbing on a security gate and putting his head in between the metal gate, but the automatic gate suddenly started pulling back.

Nearby CCTV clip shows the boy in red top gets his head stuck in the gate. His mother desperately tried to free her son while calling for help. Onlookers including one policeman rushed towards the gate to pull the gate to the right in a bid to save the boy.

On-duty police officer Qiao Kun told the reporter that the toddler had his head and left shoulder firmly stuck inside the gate.  He added that the gate was still pressing on the boy during the moment of rescue.

Few minutes later, the boy was rescued and sent to a nearby hospital. The boy did not sustain any injuries.