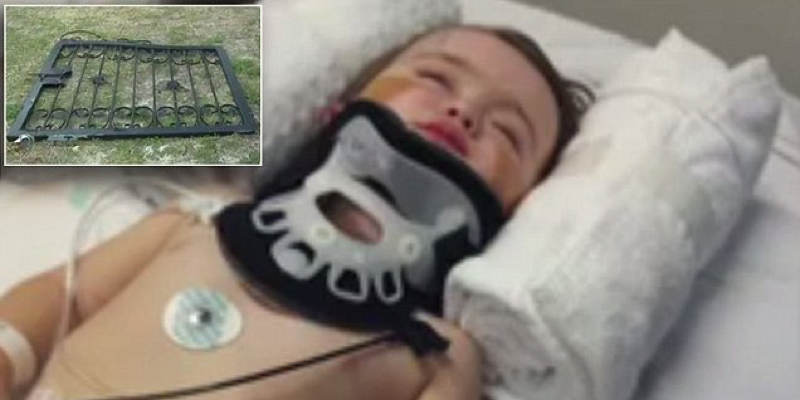 Toddler, two, whose skull was crushed when a metal gate snapped off its hinges and pinned her to the concrete suffers a stroke after undergoing lifesaving surgery

A two-year-old girl underwent lifesaving surgery for bleeding on the brain after her skull was crushed when a metal gate pinned her to the ground.

Sophie Brown’s head was slammed into concrete when the heavy gate on her parents’ Perth rental property came off its hinges, severely injuring her.

The toddler was rushed to Princess Margaret Hospital for a three-hour operation to remove part of her skull which had become lodged in her brain during the freak accident, PerthNow reported.

The toddler, who will celebrate her second birthday in hospital on Wednesday, suffered bleeding on the brain when a piece of her skull became lodged in it. She has also suffered a small stroke following surgery

Her father, Marc Browne, said he watched helplessly as his little girl was crushed under the weight of the metal gate.

‘I’ve basically got no more tears to cry,’ he said. ‘It’s just shattering to see your daughter like that and not be able to help her.’

The family no longer wants to return to their Gonsells property as the broken gate is a constant reminder of their daughter’s near-fatal injury. Mr Brown is attempting to prematurely end the lease and has reached out to the Department of Commerce for assistance.